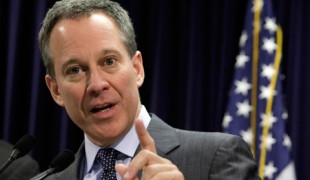 In a letter to both Daily Fantasy Sports behemoths DraftKing and FanDuel, New York Attorney General Eric T. Schneiderman demanded the names, job titles and descriptions of any employees who aggregate and compile a wide range of data that perhaps could be used to gain a personal advantage — including ownership percentages and pricing algorithms. The companies have until Oct. 15 to respond, according to the New York Times.

Additionally, Schneiderman demanded that the companies turn over details of any internal investigation into Ethan Haskell, an employee at the center of a scandal that led to the AG’s demands.

Haskell admitted last week to inadvertently releasing data before the start of the third week of N.F.L. games. The employee, a midlevel content manager, won $350,000 at a rival site, FanDuel, that same week.

The two companies said they had investigated Mr. Haskell and cleared him of wrongdoing.

“It’s something we’re taking a look at — fraud is fraud,” Mr. Schneiderman said in a radio interview early Tuesday before the inquiry was announced. “And, consumers of any product, whether you want to buy a car, participate in fantasy football, our laws are very strong in New York and other states that you can’t commit fraud.”