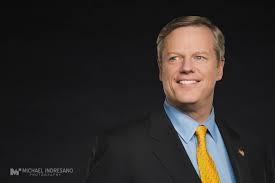 DraftKings.com has one powerful politician its corner.  Massachusetts Governor Charlie Baker says he believes DraftKings is a “game of skill” and admitted to playing the free version of their site on his phone this past weekend.

“I don’t think it’s gambling,” he said on Thursday, according to Boston Herald’s Matt Stout. “It’s a game of skill.”

DraftKings is based out of Massachusetts capital and largest city of Boston.

These words come just two days after New York’s Attorney General Eric Schneiderman declared what DraftKings and its rival FanDuel operate what amounts to an  “illegal gambling” enterprise.  He ordered both sites to stop taking bets from residents of New York. The two companies have vowed to fight Schneiderman in court.

Massachusetts own Attorney General’s office is conducting a review of DraftKings, though AG Maura Healey has said she does not believe the company is violating any state laws.

“I think that people looking at this acknowledge it’s a form of gambling. The question, though, is whether or not that’s actionable under the law and do we have in place the right kind of legal and regulatory framework to address that,”Healey said, according to MassLive.