The Best Rookie Quarterbacks in the NFL 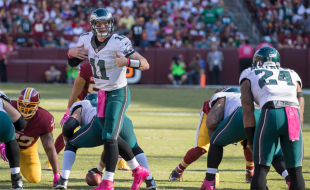 At the halfway point in the season, it’s fair to say that not all of the football pundits’ predictions have come true as far as rookies are concerned. Here, however, are a few young quarterbacks that are living up to their potential and could have some relevance for fantasy sport in the future.

A bit of an obvious one, the Philadelphia Eagles’ Carson Wentz has a pass completion rate of 65.8 for 1,526 yards, as well as nine touchdowns and three interceptions. The no.2 pick in the 2016 NFL Draft went three wins with five touchdowns at the start of the season without an interception. The Eagles’ fans have almost uniformly accepted him as a hero.

The problem with Wentz is that he’s being chaperoned by the rest of the Eagles and he’s limiting the team’s offense in that respect. After Philadelphia’s recent loss to the Cowboys, the youngster became the first quarterback in history to attempt more than forty passes, complete more than 70% of them, but cover less than five yards per pass. In other words, his throwing isn’t really getting the Eagles anywhere.

The real test for Wentz will come when Philadelphia let him off the leash but he’s going to need somebody to pass to. Current receiver, Nelson Agholor, has dropped the ball so many times he's asked people to stop talking about it. The Eagles are reportedly in the market for somebody like Torrey Smith (49ers) or Alshon Jeffery (Bears). Rookie, Agholor, may yet make something of himself but he needs to own his mistakes.

Granted, the Titans’ Mariota can’t quite limit his turnovers, his decision-making leaves a lot to be desired, his deep pass needs work, and the only thing he’s consistent about is being inconsistent but he’s thrown more touchdowns after his first twenty games than the likes of Tom Brady, Ben Roethlisberger, and Eli Manning did.

Mariota is a question mark as far as rookies go. He’s either a talented player who hasn’t quite grown into his potential yet, or a supremely lucky individual, but he’s someone who deserves a chance in either case. As of Tennessee’s 36-22 win over the Jacksonville Jaguars on Thursday, he has thrown for 1,874 yards and counts 14 touchdowns and six interceptions among his stats.

Dak Prescott recently made a name for himself with a series of stellar performances covering for chief signal caller, Tony Romo, who is out with a broken bone in his back.

Last year, during another of Romo’s increasingly frequent injury spells, the Cowboys didn’t have much in the way of a replacement for the veteran (the likes of Kellen Moore and Brandon Weeden didn’t really impress) but, this time around, Romo could find his regular spot in the balance when he eventually returns.

Prescott has a 65.2% pass completion rate (1,773 yards and a passer rating of 99.6) over seven games, with nine touchdowns and two interceptions. He’s out-performing the Eagles’ super rookie, Carson Wentz, over the same period.

The fact that Prescott played arguably the worst game of his NFL career against the Philadelphia Eagles on Sunday (29-23 Cowboys) and he’s still mentioned in discussions around Romo’s successor is testament to just how good the Louisianan has been these past few Sundays. You have to give credit to a rookie who was criticised for playing like one for the first time all season.

If the Cowboys can win their next game against Cleveland, Prescott will be too hot to drop, even with Romo (likely) back the following week. There's a lot on the line though; the Cowboys are 11/1 for the Super Bowl with Betway.

Finally, there’s Jared Goff, who is a starter by virtue of the fact that Case Keenum recently threw seven interceptions for four touchdowns. It’s not a great way to set a stall out for the Rams but Goff needs field time and Los Angeles need something to turn their season around.