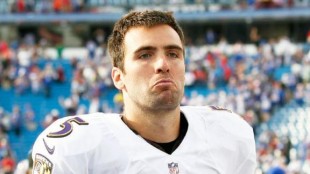 Gambling911.com has your Baltimore Ravens Daily Fantasy Football picks for 2015 with early season pricing courtesy of StarFantasyLeagues.com and subject to change.

Flacco’s fantasy output has been under 20 points per year on average since entering the league.  Much of that has to do with his improved efficiency when asked to throw the ball less.

Flacco’s pass attempts last year dropped from a career high 614 in 2013 to 555.  Flacco still threw for just as many yards as well as having eight more touchdowns and ten less interceptions.

The Ravens starting QB does have some degree of value, entering the season priced around $6.7K compared to say a Drew Brees at $8K.