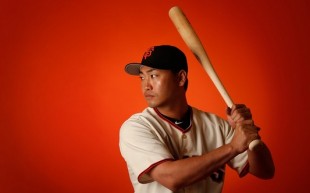 Against the Padres Ian Kennedy, Neil Walker is your man with 9 RBIs having gone 8-for-18 against him.  He also has four homers over that period. Despite his modest under .300 ERA this season, Walker has hit in six of his last ten overall.

Andrew McClutchen has gone 6-for-15 against Kennedy.

On the other side of that game we have Justin Upton going 6-for-14 against A.J. Burnett.  Two of those were homers.

Nori Aoki is on fire of late and has gone 7-for-18 against Shelby Miller with one homerun during that time.

Aoki was perfect at the plate Monday, going 4-for-4 with a home run and a stolen base in the win over Milwaukee. (Tue May 26)

The A's C Stephen Vogt was 5-for-11 in the Detroit series and is batting .339 at home where Oakland has won nine of the last 10 meetings at home.

You will want to pay special attention to red hot Nori Aoki on Sunday May 31.  He is 3-for-4 hitting against Atlanta’s Julio Teheran.