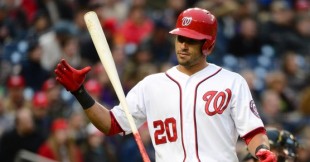 Desmond, meanwhile, went 3-for-5 with two doubles in Wednesday's victory over the Cubs and has hit in nine of this last ten games.  His batting average continues to climb.  He’s priced at $3400.

He has gone 5-for-23 against Dickey.  Sideline Desmond Monday night but consider him for both your Tuesday and Wednesday rosters

He has not faced Marco Estrada but his performance of late makes him an enticing play though a bit of a gamble.

On Wednesday, Desmond goes up against the Blue Jays Mark Buehrle, for whom he’s hit 2-for-6 against.

Denard Span is 12-for-33 against Buehrle with 5 RBIs and 2 homers. He’s hit in all but two of his last ten games.