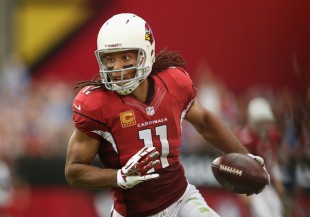 When it comes to NFL Week 5 Daily Fantasy NFL, the Arizona Cardinals receivers look to be among your best options.  Even Michael Floyd looks attractive in some Fantasy formats.

The Detroit Lions have allowed the 8th most fantasy points to this position.

Larry Fitzgerald ($6.8K) – He is the bona fide star here and the price is doable especially when one considers, through four games, Fitzgerald has gone 120-1,728-20 pace on 148 targets.

John Brown ($5.1K) -  A more affordable option to Fitzgerald against a Lions team that has struggled mightily versus opposing wide receivers, Brown caught 7-of-10 targets for 75 yards in the Cardinals' Week 4 loss to the Rams.  Through four games, he's on pace for a 76-912-4 line on 108 targets.  More DFS players are likely to be on Fitzgerald, making Brown an even more attractive option.