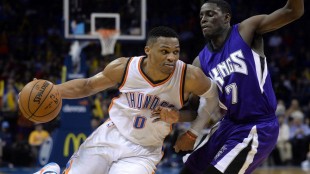 The Oklahoma Thunder’s Russell Westbrook needs only three more triple-doubles in order to break the record of Magic Johnson.

The Daily Fantasy NBA juggernaut Westbrook is averaging 23.7 and 10.5 every game. Rebounds are the bigger issue, and he's grabbing 7.7 per game.