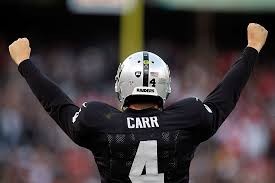 DFS911.com has your top Daily Fantasy NFL picks for Week 4.  Be sure to check out Star Fantasy Leagues for some competitive contests with a better chance at winning than at DraftKings or FanDuel.  The leading provider of Daily Fantas Sports software platforms.

Derek Carr (Raiders - $5.3K) – Great value here against a Chicago team that ranks 31st in the NFL in pass defense.

Cam Newton (Panthers - $7K) – He is a solid play here having scored well over 30 fantasy points the last time facing Tampa Bay.  Not much has changed in the past two years (Cam did not face these division rivals at all last season).

Andrew Luck (Colts - $7.8K) – *Luck may be out for this game.  Pricey for sure but still among the top 3 fantasy quarterbacks in the league right now and, against Jacksonville at home, how can you possibly go wrong?  In Week 4 against the Jaguars last season, Luck managed to score around 40 fantasy points.   Indianapolis presents a few good fantasy options this week.

Andy Dalton (Bengals - $5.9K) – Great value and worth considering against a Chiefs team that has given up ten touchdown passes since the start of the season.

Melvin Gordon (Chargers - $4.9K) – He’s your man here.  Gordon has 48 touches through three games, though none of those have been in the red zone.  This should be the game that gets him there. Cleveland has permitted plenty of fantasy points to opposing running backs, including three touchdowns.

Chris Ivory (Jets - $4.8K) was active last week but unable to play through the injury.  He and Bilal Powell ($3.7K) are expected to split work Week 4 against Miami, whoare not very good against the run.   Either player works in Week 4.

Frank Gore (Colts - $4.7K) rushed 14 times for 86 yards and two touchdowns while catching 1-of-2 targets for 8 yards last week against the Titans.  Gore pretty much led the team down the field to score their game winning touchdown.  And this week he faces a woeful Jaguars squad.  Nuff said.

Karlos Williams (Bills - $3.4K) is an excellent option at running back at a very decent price.  The Giants have not had much success against opposing running backs.    Williams rushed 12 times for 110 yards and a touchdown in Buffalo's Week 3 win over the Dolphins

Matt Forte (Bears - $7.1K) – With the Raiders defense permitting 23 of 24 targets to be caught by running backs this season, Forte has tremendous value in this matchup.  There is a risk in that Forte could be traded prior to this game.  Dallas has said they have not discussed a trade deal with Chicago.

Latavius Murray (Raiders - $7.5K) – He may be a bit too pricey for some but the reward is likely to benefit far beyond the risk.  Latavius Murray tallied 139 yards and a touchdown on 26 carries and caught his lone target for ten yards in Oakland’s win against the Browns last week.

Alfred Blue (Texans - $3.4K) He rushed 31 times for 139 yards and one touchdown in the Texans' 19-9, Week 3 win over the Bucs.  He’s an excellent option this week, especially at this price, and regardless of whether Arian Foster suits up or not.  If Foster does not play, Blue is going to make well over value.

Wide Receivers
Ted Ginn (Panthers - $3.4K) is your best option at wide receiver, a position Tampa Bay has struggled against.  Ginn has led all Panthers' wideouts in targets for the second straight week.  He caught 4-of-6 targets for 93 yards in Week 3 against the Saints and could enjoy even better production against this Bucs squad.   He is the second option in the passing game behind Greg Olsen ($5.4K).

Amari Cooper (Raiders - $6.3K) Cooper has seen 31 targets thrown his way, catching 20 passes for 291 yards and a touchdown. He will face a Bears team that has allowed the fifth-most fantasy points to wide receivers this season.

Jordan Reed (Redskins - $4.5K) – He is consistently being targeted each week and making value.