Steelers Have Some Fantasy Value This Week 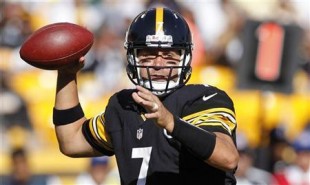 Sure Ben Roethlisberger looked pitiful this past week against division rival the Cincinnati Bengals, but Week 9 you’ll want to consider him for your Daily Fantasy roster, if only the price were a bit lower.  The Pittsburgh Steelers face a new look Oakland Raiders team in Week 9.

Ben Roethlisberger ($6.6K) – He will be taking on an Oakland team that has permitted the 8th most points to opposing QBs.

Last week, back from injury, Roethlisberger completed 28-of-45 passes for 262 yards with one touchdown and three interceptions.

Heath Miller ($2.7K) – Based on last week’s performance, Miller is priced below where he probably should be as someone likely to play an active role in the Steelers rotation.

In a perfect world, Miller should thrive against an Oakland squad that can’t defend against tight ends.  This is demonstrated with the Raiders giving up the most fantasy points to this position.

Antonio Brown ($8.1K) – This is NOT the week to go with Brown.  Coming into last week against the Jets, the Raiders had now allowed a running back to carry for more than 91 yards.