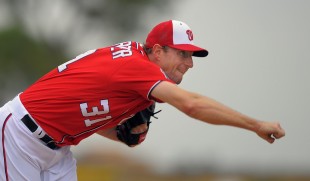 Max Scherzer (10-6) came away with a no-decision Sunday, despite allowing just one run on six hits and a walk over seven innings, while striking out seven in an 18-inning loss to the Pirates.

Scherzer off a no-decision needs some serious consideration Saturday July 23 as the right-hander is ranked number two in ESPN.com’s Fantasy rankings.

It doesn’t hurt that he’ll be going up against the San Diego Padres, a team he has allowed just 15 hits off of in 114 at bats (this against the current Padres roster).

Edwin Jackson will start for San Diego in his second game for the franchise.  His debut was spoiled by a late home run after a stellar performance the first couple of innings.