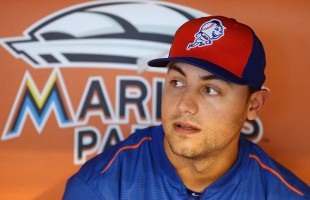 Michael Conforto is now hitting .455 since being called back up to the majors.

Conforto was starting in center field for the first time in his Major League career Sunday, making his debut the day prior.

"He's here because he can hit," Mets manager Terry Collins said. "If we don't play him in center field, we have no place to play him. We've got to get him in the game. The other thing is we've got to find out if he can do it, and we're not going to find out until we get him out there."